TRue love is forever, even if you don’t want to admit it…

Malik Dawson – better known to his brothers as Wick; The Vice President of The Kings of Retribution MC, Louisiana Chapter. He lives for his club. The unity and loyalty of the brotherhood give him a sense of purpose and belonging he felt he was missing after years of serving his country.
But all men have their demons, and Wick carries the pain and guilt of losing his childhood friend; the friend he feels he did not protect as they fought side by side in combat. Before he died, Damien made him promise to always be there for his little sister, Vayda; look after her and protect her if something were to ever happen to him.
Following through on a vow made years ago, Wick watches over his fallen comrade’s sister.
Then one night, he kisses her, and he no longer sees her as his friend’s kid sister. She becomes so much more.
It should never have happened. That’s what he keeps telling himself.
Wick becomes torn between what he wants and the promise he made to his friend years ago. Distancing himself, Wick avoids the overwhelming need to claim her and make Vayda his.
When a rescue mission is compromised, and Vayda’s life is on the line, Wick holds nothing back. He sets out on a mission of his own to find her—killing anyone who gets in the way.
Vayda Wilder—aka—Tequila, comes from a long line of military service members: Grandfather, Father, and big brother, Damien. All her life, she dreamed of becoming a United States Air Force pilot. Chasing her dreams, Vayda enlists straight out of high school, becoming the best soldier and pilot she could be.
A few years later, her brother’s death left her devastated. Damien was Vayda’s hero and the one person who she felt truly understood her.
With years of experience, Vayda starts taking on secret covert missions and saving countless lives from the evil grip of human traffickers. Soon her assignments begin crossing paths with her brother’s best friend, Malik.
One unforgettable kiss changes everything—yet it doesn’t.
Malik becomes distant—treating her like she no longer exists.
Burying herself deep in mercenary work helps take her mind off the man she wants until she finds herself captured by the Cartel.
Fighting for his woman, Malik, and The Kings of Retribution become Vayda’s only hope of making it out alive. 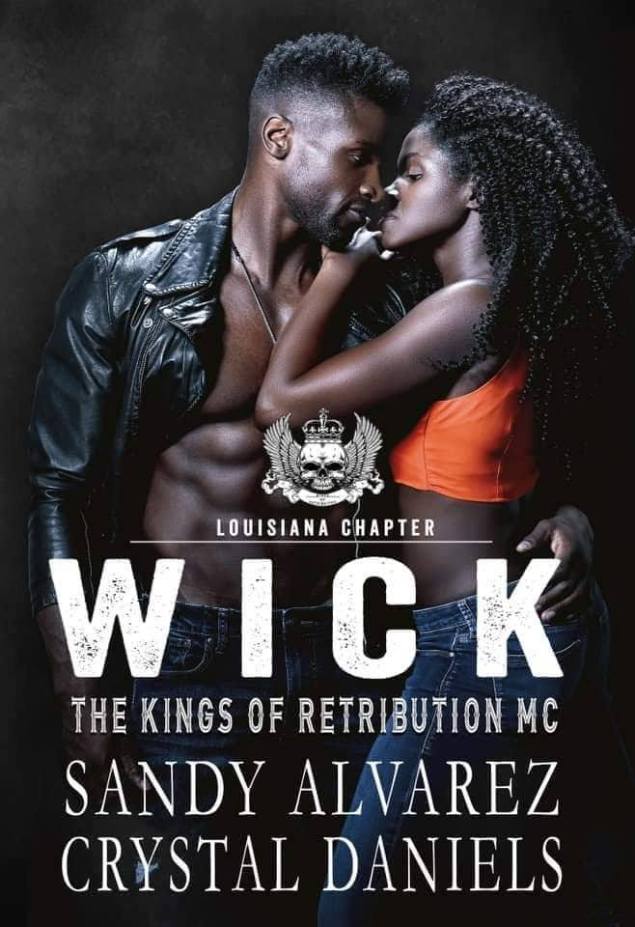 I’ve been reading non-stop these last couple of weeks and even though I’m so freaking tired a can’t stop.
I can’t rest and think that I have a book waiting to be devoured. I can’t. And knowing that the fantastic duo has another book… Guess what? I needed to start reading it asap.
There was only one problem… Wanna know what that problem was?
It was midnight by the time I started reading and guess what time I went to bed?
That’s right. I barely slept and I have no regrets. Lol.
I looked like those kids that say “I’m not tired” and could barely keep their eyes open.
Crystal Daniels and Sandy Alvarez are two queens for the MC writing. Their writing completes each other and will make you scream, curse, shout… You name it.
You’ll be a mess. In a good way, of course.
Wick is their latest release and it’s the second book from the Kings of Retribution Louisiana chapter.
But I must alert you to something first. For me, it’s imperative that you start reading The Kings of Retribution, the mother chapter, and only then start this series. You won’t regret it. But, if you don’t have time to read the other books, read Riggs first and then read this one.
This new book explores the lives of Wick and Tequila.
Wick is one of the brothers. His life turns around protecting his brothers and his bar.
After his time in the military ended, and witnessing his best friend murder he knows that he needed to get out. To live his life…
Tequila is a badass. She looks though on the outside but on the inside she’s broken. Not only had she lost her brother in the war but she had also seen the man she loved flew away. Being in the military can change a person but love can destroy you.
Oh. My. Freaking. God…
This book… Oh boy. I’m speechless. Stunned.
This book just made my night. It was the perfect story to lighten up my heart.
Sublime plot, very well written, super engaging and intense. It was chapter after chapter without flaws. Without a great scene. Each scene was even more snagging and I couldn’t stop.
Once I started to read it I couldn’t put it down. I was so into the story that I couldn’t pay attention to my surroundings.
Great chemistry these two shares and their stubbornness almost got the best of them.
The hot scenes were breathless but the action scenes made me shake.
I’m so in love with this series that I’m struggling to not spoil.
Crystal and Sandy… What can I say? I nailed it again and I’m so honored for the chance to read it.
OK girls… Now spill it. What’s next? Nova? Kiwi?
Please let it be Nova.
I voluntarily read an Advance Reader Copy of this book. 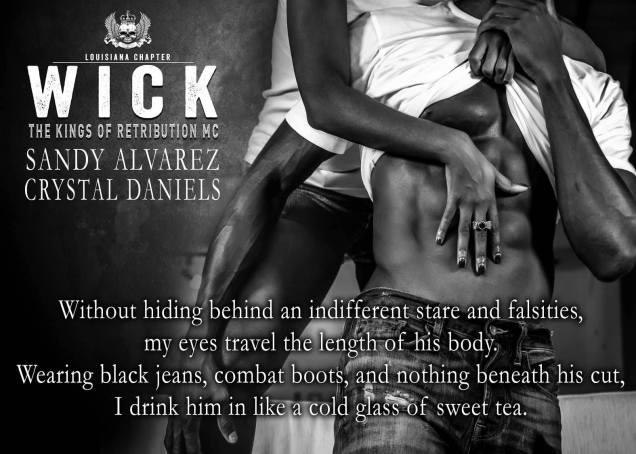 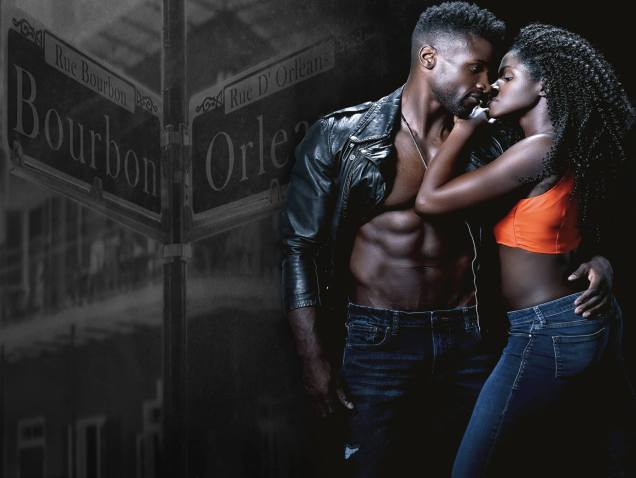 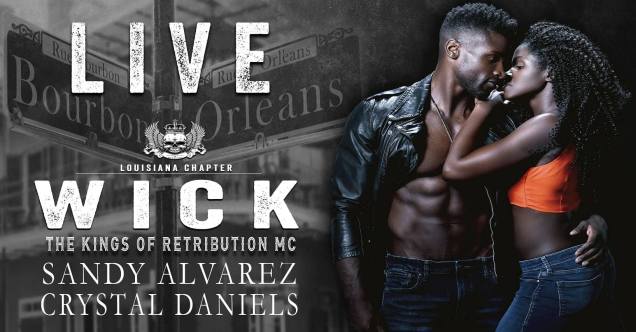 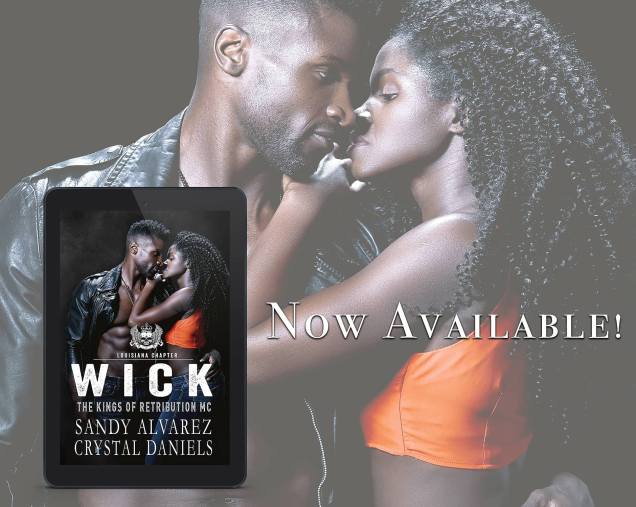 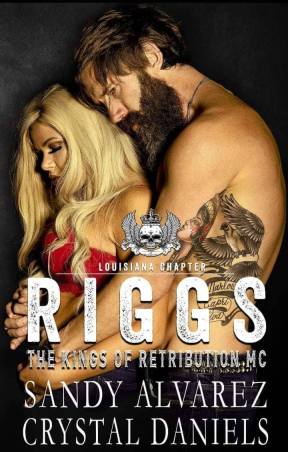 Add to your TBR: https://bit.ly/2ZtYqJO

We are sisters who both share a passion for books. Our obsession for bad boys, alpha males, angst, romance, hot, sexy, and happily ever after has lead us on a journey, a dream to not only read all the incredible stories we love so much, but to write one of our own. Both born in Illinois, then moved to Wyoming, were we spent part of our childhood before moving to Mississippi. Crystal lives in Pearl Mississippi with her husband of twenty-one years, two sons and their two dogs. Sandy lives in Brandon Mississippi with her husband of eleven years, and four kids.